RS: Your website invites me to find you at the British Museum, but that’s a lot of miles from where I am currently sitting, so instead I will ask you about the British Museum. What are your favorite exhibits there? And, if it’s different, what have you discovered there that was most unexpected?

DW: The Ram in a Thicket from the Great Death pit at Ur is my enduring favourite. He’s adorable. I try to visit him every time I go to the museum. It’s like having a five and a half thousand year old pet made of gold and lapis lazuli. 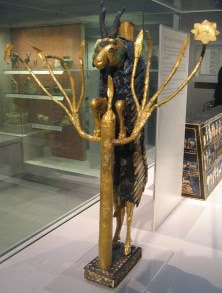 My other favourites change from visit to visit. Ah, the lure of the different and shiny. I particularly liked the Scanning Sobek temporary exhibit displaying a massive, mummified crocodile from ancient Egypt, which was once worshipped as a god. 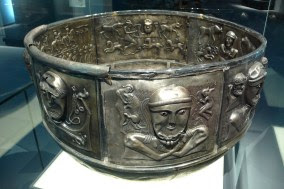 Then we have the blockbuster exhibitions, where museums loan out their treasures. I visited the Celts exhibition three times, mainly to keep looking at the wonderful silver Gundestrup Cauldron from Denmark. I was fascinated by the figures decorating the cauldron. Especially a small man riding a fish. What’s his story? The intriguing thing is, no one knows. The stories have faded away, and we’re left with only the physical object. Lost stories out of time. 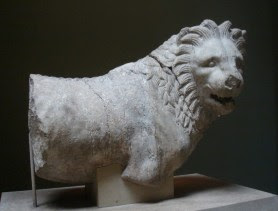 I’ve been visiting the British Museum for donkey’s years, but it would take a lifetime to appreciate it all. It holds 8 million items (not all displayed, of course). The other day, I went down some steps and found statues and temple facades from the Mausoleum of Halicarnassus. That’s one of the Seven Wonders of the Ancient World. Wow. I never knew they had them.

The museum has so many objects, so many stories. And of course, the fact that the museum owns so many wonderful objects from overseas is a story in itself, and a controversial one.

Do visit the British Museum if you get a chance. Nowadays, museums are very good at putting their collections online. But for my money, there’s nothing like seeing an object, talking to a curator, even handling the objects at the special Hands On Desks. There are museums everywhere: massive, wealthy national museums, local museums run by volunteers, specialist museums focusing on a particular topic (like the London Museums of Health and Medicine). So many stories, there for the reimagining.

RS: You have a number of stories in Nature’s Futures, which runs very short fiction about hard science fiction. Where do you get your inspiration for these, and how do you go about taking something as large as a scientific question and putting it into flash form?

DW: Inspiration comes from museum objects (I wrote a story about adding crocodile DNA to a woman), or stories I’ve read, or watched on the TV, or a prompt for an anthology call. Sometimes, I’ll search out inspiration, trawling through Wikipedia looking for a science topic.)

Science questions are large. But not as large a questions about human nature. I’m interested in using science as a mirror to reflect the human condition. So, on the surface I might be talking about gene modding the brain and the unexpected results, but I’ll also be talking about the emotional dynamics of a divorce, and touching on the concept of free-will (‘Glass Future‘). Science fiction allows me to examine human nature in a way that appeals to me as a writer more than a literary story on the same topic. Genre is more of a convenience than an absolute, though. There’s a big crossover. Stories I’ve sold to Nature’s Futures have often resold to literary magazine.

So how do I squeeze all that into flash? Well, I actually don’t consider flash to be restrictive in length. I think haiku is restrictive. Here’s a SF/horror one of mine:

red goo in the bathtub
cleaning bots dissolve anything
divorce was never an option.

I would argue that this is very, very, small story. There’s the mystery at the start: Red goo? What’s all that about? A touch of development: Why cleaning bots? Is this a domestic situation? Does that link to bathtub? Then the resolution of the story, the ‘aha’ moment, the ‘I get it ‘ moment. Many of my flash stories follow that structure: mystery, development, (and hopefully) aha.

RS: In addition to your Nature’s Futures stories, your bibliography lists a lot of other flash fiction, and also poetry and microfiction. Why do you think you’re drawn to those rapid forms? Do you know when you get an idea what general size category it’s going to fit into?

DW: One of my writing super powers is that I can decide what size the story is going to be before I start to write. So, I can think, I want to write some flash today, or a poem or a bit of micro fiction. Then I can write within the constraints of size. Some say that a story needs to be the size it needs to be, but I think that a story can be told at different lengths. I could expand ‘red goo’ into flash quite easily, by creating characters, developing their backstories, exploring the science of goo.

I don’t know what the appeal of writing short is for me. It does come naturally to me. I likes reading them and writing them.

DW: Well, here’s the thing. I’ve been writing for ten years and nobody has ever given me any advice. I’ve never been in a tutor/student relationship. I very rarely get crits or beta reads on my stories. I just writes them as hard as I can, and then joyfully fling them out on submission.

I’ve read plenty of advice in craft books and on the interweb, but nobody’s ever said “Hey, Debs, perhaps you should do this thing or that.”

Tell a lie, in the past, people have occasionally said that I should write a novel. So, when an opportunity arose to write a tie-in novel for the Dark Expanse online role playing game, I did. That was good advice.

I wouldn’t mind someone giving me some more advice. Rachel, perhaps you could give me some.

What new projects do you have coming out? Anything else you’d like to add?

DW: I’ve talked a lot about writing short. But currently, I’m writing long. I’m writing a novella called ‘The Museum of Unnatural History’ set in the UK where a secret people with their own genetic signature and cultural identity, have recently been uncovered. Its current incarnation is traditionally plotted but written in literary prose, which I’m rather enjoying. I’m going to have to think of a new title, because there actually is a Museum of Unnatural History in real life. I have two new short stories out, one in Nature ‘Contagion in Tranquil Shades of Grey‘ and ‘Blue Blood Bleeders’ in the Young Explorers Adventure Guide 5 anthology a collection of SF for young readers.